Whooo. OK How many days since my last posting? When was the last time I had internet? How about fucking hot water? Geez... So much has happened, and yet not. Well, lets get to the story as it stands now... Your Intrepid Reporter is in Baghdad, Land that Sanitation and Good Manners Forgot, and will be for the next 24 hours. Then, I sky.
YES!!!
R&R after 5 or so months... 5 and some change actually. Time to kick the dirt offa da bootz and roll to the House, Cold Beer, kids and a warm and (hopefully) Willing Wife... truthfully, she'd damned well better be willing after this long assed enforced celibacy... anyways... Well, lets see...
When we last left the IR, he'd been forced to work long hard assed hours. Nothings changed there. No time off, no internet and no fun. The only relief has been the occasional Extreme Sport of "Drinking Outside The Wire" at the Iraqi bars. A sport not for the faint of heart, nor even the fucking sane. Despite the Militarys enforcement of "No Booze No Fun No Sex" General Order Number One, which happens to end with a codicile written in 'weasel speak' (meaning lawyerese) that "And if we haven't thought of it and written it here, it too, is strictly prohibited." Well, despite that I say "Fuck it." and go for it. I mean what sort of Contractor would I be if I didn't bend the rules now and again? I mean hell... My wife sez there is no 'Black and White' with me, just 'Shades of Grey' as the Dead song goes. I mean as I say "No harm, no foul" then hey? Sometimes you just gotta say "What the fuck?"
Now before I quote Tom Cruise again, I'll pause to beat my head with a fucking mallet, and then I'll continue... So as I was saying, the internet has been totally dicked up lately. Only recently did the genuises I work with figure out how to get it running so I'm good. Fat lot of good of course, seeings that I'm leaving tomorrow, but given the option of staying? OH HELL NO! So yeah, I finally finished the Compound that I was tasked into costructing. Head Hajji Overseer again. Unlike the last job I did back in '04, this one was pretty smooth, albeit that we got ripped of by the Haj on our generators... they said they were new, but two days into the running of them, the fucking muffler broke off of one of them, and the other one runs like a fucking poorly tuned Asthmatic Yugo. Have you ever stood close to a 30K generator running flat out? Think LOUD. Like holy shit loud. Now, imagine it if you can, being even louder. The muffler keeps it so that you can think... without it? the damned thing sounds like a Kenworth running at 110 miles an hour flat out. LOUD LOUD. As in "shakes the fucking walls down" loud. So I get the blame.
Oh yeah... did I mention I have a new boss? I'll refrain from going off... lets just say he looks about a Large Long in an Orange Jumpsuit and I was pricing Machetes in the PX yesterday. Dude had better remember that this IS Iraq and accidents and "The Dirty Haj" do happen.
So yeah, I have to show one pic of the construction : 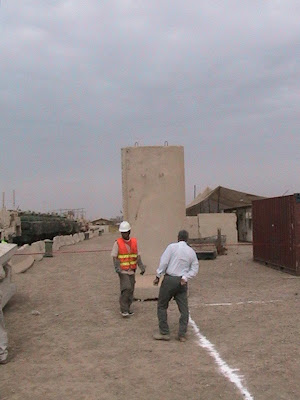 This is when they started to lay the T-Walls which are supposed to protect us from mortar and rocket attacks, and yes, the Hajji supervising is in fact digging deep in his asscrack. Yeah... "IMPORTANT Note to self... do NOT shake hands with the foreman." The dude kept working that hand there to the point it was obvious that he had 'something' wrong and man, there is just waaaaaaaay too much info just in the fact that I didn't INTEND on that picture being taken. I was snapping away and I happened to catch him at it, but considering the frequency that he was doing it, I'm surprised that ALL the pics of him didn't show "Mister Itchy Ass Haj" doing it in all of them.... Ugh... what a country...

So on other news... One serious note... According to GlobalSecurity dot Org, there have been 38 US Service men and women Killed/Named KIA since the Obamamessiah took office. How many of them have you heard of?

Ahhh thats right... you won't or haven't. The Mass Corporatemedia, also as I call them, the Demomediamania Mob, made up of the likes of the Communist News Network and such have downplayed the loss of our brave warriors. How many times did the media slavishly and completely run every single casualty when Bush was in office or when McCain was running for office, being dragged into the spotlight and laid bloody at the feet of the Republicans? How many families were devastated by these fucking vultures and scum-monkeys by being asked "How does it feel that your son/daughter died for George Bush's war?" Hmmn... like I said... it's time to target the media... physically. If you're a vet, the next time a newman comes over to you, just knock him the fuck out, or, if you're disabled, hose 'em down with Bear Mace. It's the least they deserve. I mean how many times did those Goddamned Vultures DEMAND the right to film at Delaware when the coffins were being offloaded? A couple of hundred that I could see. Now? Not so much. Fuckers. "Freedom of the press?" Howabout the freedom to kick your scummy fucking ass when I get the chance?

I'm truly disgusted. 38 of our best, killed, but no one fucking mention or honor... the Media Clowns used to cover every single death... granted they had an agenda, and I disagree the way they did it, but at least they still allowed America to see that our best had fallen, and allowed the rest of America to pause and maybe reflect, or even say -GASP- a prayer for them and/or for thier families...

Now these fucking douchebag fucking worms hide and bury the news, so as to not 'stain' their "Chosen One." I swear to God in Heaven that when I hit the States tomorrow, if theres a media crew there filming or asking or interviewing troops, I'll have a tough time restraining myself.

Anyways... gotta stop thinging about it... it gets the blood boiling and I got my Irish up so to speak. I'll leave it at this: I'm final;ly going to be home for a while, and am looking hard forward to it, so I may update when I'm there, but that remains to be seen... I'm just thrilled to be going home to my family, cold beer, hot, clean water and flushable toilets. No more blue water poo boxes for 3 weeks!!! Until then, I'll holler at you later!

The Thunder Run has linked to this post in the blog post From the Front: 03/31/2009 News and Personal dispatches from the front and the home front.