It's been how long?

Wow.... Time flies when you're working your ass off, day after day, slaving for "The Man" and not having any down time.... Yep the IR here with not so much for the scene in The Baghdad Cafe, formerly known as the Saddam-A-Go-Go. The only thing I've been doing is 'ye olde nose to ye olde grindstone.'

Seems that "The Big Boss Man" came to town... and I'm burned out for it... Yeah... The Corporate Head honcho showed up and I'm better for it in many respects, especially since he's carried the Corporate Checkcard and Pimp-Roll-O-Cash to smooth out the purchases and such that I've been screaming about over the past few months, it's helped me with my job SIGNIFICANTLY.
My biggest issue though is there's hardly any 'skate time' Not when the guy who's in the "make or break" side of your career is sitting right behind you for 12 hours out of the day. Considering the poor bastard is working AS much if not more, then I'd be amazed... He sits and works with us all day long and then he still has to go home and be joined to the computer, as the States are like 8 hours behind us.... meaning when the Corporate Pinheads schedule a 4pm Eastern Standard telconference, we have to be up at like midnight here... AFTER having already done a fucking 12 hour shift... But it's the reason I haven't had too much commentary to throw out there as of late. I've been flat the fuck out busy busy and to the point I haven't updated anything, to include facebook, myspace or any of the other bits of entertainment you loyal readers follow me and the Not So Much Lately Adventures of the Intrepid Reporter.
But, as of late, Baghdad is quiet. The changeover between 4th Infantry Division and 1st Cavalry Division is pretty much over with now. Yep... leave it to me to be 'back with the Cav' again like I was in 04-05. I just can't seem to escape 1st Cavalry Division... it's like a reoccurring cold, or actually, considering how the Cav annoys me, I'd say it's more like having a case of herpes... flares up and annoys the shit out of you at the most inopportune times... I mean it was being in the Cav that got me hurt many many moons ago, and it was the Cav that screwed me over every time I turned around during my Med Board, and then, in 04, it was the Cav that abandoned me, Lil Country, and the rest of the CACI folks when they 'pulled the line of battle' back during a particularlly hairy week, leaving us as "Fresh Meat" for the Dirty Haj if they felt so inclinded. The Cav... as I say of the patch 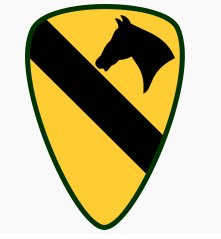 "The Horse Never Ridden, The Line Never Crossed, and the Color Right Down The Back."

That about sums up 1st Cav... and I've EARNED the right to bag on that unit... Having spent 4 years and all the shit I went through, I have DEFINATELY BT-DT-GTTS.

But yeah. Baghdad is quiet. Mosul now? Not so much. Reports filtering down through various 'shall remain unnamed' sources have filled the IR up with all sorts of tales... Seems that the Surge that the Media loved to lambast but now keep their mouths shut about worked in that the US Army, combined with a newly re-energized Iraqi Military, succeeded in driving the majority of terrorists and babyrapers right out of the Capital. They headed North into Kurd Kountry... Sunni Central from my understanding of it. We've taken some casualties (another thing you WON'T hear from the media as trumpeting casualties lays it on the Obamamessiahs Lap rather than George "I'm Outta Here" Bush.) but we're still winning.

Which brings me to my point of an earlier post. I didn't get ANY responses about beating on the reporters or such ideas. I mean "Beat The Press" is such a cute bit of wordplay, and the idea of taking some of these neo-socialist fucking hacks and feeling the impact of my "mighty right fist o' death" on one of their smarmy, mewling, puking, plastic-enhanced grills, and having the satisfaction of watching caps and teeth fly like so many chicklets from a goalies' mouth.... Damn... I need a cigarette... That would be OH so nice. To see Dan Rather get stomped (even though just pushing him over or hiding his dentures would be good enough) while singing the R.E.M song for all of his inordinate Anti-American Tirades... to see all of them Tarred and Feathered properly. Properly in that the tar is heated to such a degree that said victim(s) would usually die from the 2nd and 3rd degree burns even before all the feathers could be properly applied.

I'm now OFFICIALLY on the "Anti-Press Bandwagon." The country is broke, broken and we've got nothing to show for it than a neophyte president who's wholly incapable of stringing a coherant thought into a concerted sentence without the use of a teleprompter who was elected more by a festering neo-liberal bunch of malcontents who, rather than actually do their jobs, were content to be Democratic Cheerleaders and get a man elected who, in reality, scares the ever loving shit out of me. Me? I'd prefer if The Hillaroid had gotten in... better the "Socialist Demon You Know" than the "Closet Muslim Neo-Fascist You Don't." The Press succeeded in swinging the vote, and is now complicit in hiding the ABYSSAMAL job that their chosen one is doing.

God Help us. I'm barely making ends meet working my ass off for the "Imperial Federal Government" and I'll be lucky if they don't chop the 'tax free' duckets off of my tax return. It's like the ONLY reason I stay here. Tax free is the ONLY reason, and making 100K a yearhelps too. No such thing as that in the states now eh?

BTW: One last note: My mailing addy has changed to

The DSN Number on the bottom helps the mailroom folks to call me when the stuff shows up. Please feel free to mail me anything and everything. My "other mother" Susan sent some of the most KILLER chocolate chip cookies, which actually made it here inside of 5 days of her mailing them... My thanks for those... they rocked!!!! Any booze drugs or anything else... well, I'm NOT supposed to get them, but at this point, any and all donations are gratefully recieved. Seeings that I'll be home in the end of the month, (R&R Baby YEAH!!!) I'm really looking forward to it.

OH One more thing. Let me know if anyone wants a job over here... working with me. I'm literally hiring another Logistician, so send me them resumes to all who are interested. Until then, I remain, the Intrepid Reporter.

The Thunder Run has linked to this post in the blog post From the Front: 03/09/2009 News and Personal dispatches from the front and the home front.