You do Photoshop your Way... 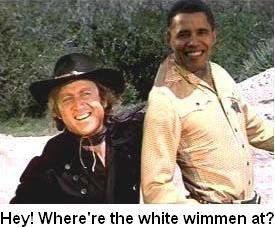 Yes... it's kind of stuck in my head the way that the Obamabots been so active with using Palin's head on that skank's body with the air rifle (among others I've seen), so tonight while surfing around and reading, I realized that I had the perfect idea for both an article AND a "Photoshop Moment."
Yeah... I think it's rather appropriate seeings that this is THE exact question Barry and Co. are going to be asking over the next few weeks. The "Slamfest" that they started on Governor Palin snowballed into something that they themselves never envisioned. It's become the uncontrolable monster so to speak, in that they had hoped to control the Narrative, just like they have with Barry's story. Instead it's damaging their 'Chosen One' and causing chaos. Barry has now been, by my count, on the defensive for about a week and half, and his polling has been tanking when compared to two months ago. The concept that the Obamamites thought that they could either subtley or in most cases not-so-subtley attack a Mother of Five whos credentials equal or even exceed their candidates was preposterous on it's face.
The basic issue is that they thought that they had the "Woman's Vote" locked up by merit of being 'progressives' and 'liberal' in itself. I think the term is 'Hubris' in this instance. The presumption that "just because they have in the past" should not mean you take them (meaning the female vote) for granted. In this case Janet Jackson's song "What Have You Done For Me Lately?" comes leaping to mind, especially when dealing with a group as touchy as Women Voters.
"Big Country! You SEXIST PIG!"
Well, more like a chauvanist pig, thank you very much. My wife, Household Six even agrees that I'm one of the last "He Man Macho Men" rolling. Of course I think that its more appropriate for her to not work and be a full time mother at home while I earn the cash to run the house. I also don't separate colors when, on the rare occasion that I do laundry, and I'm happier for it. As far as Women Voters, I've been exposed to waaaaaaaaay too much of that shit when I was a child. My Mom was a big-time "League of Women Voters" activist and HUGELY into politics when I was a kid. My Dad with his rather twisted sense of humor would refer to it as the "League of Wimmen Vultures" as the majority of them weren't none too good looking. Mom was so into it that she'd draft my brother and me to help campaign for (UGH!!!) Ted Kennedy back in 1980 or something like that. She figured using us to hand out flyers and such because we were still in 'cute kid mode' that we'd have a better chance to get the vote out. Whatever. I remember that every election year my house that I grew up in became a madhouse of long haired volunteers sleeping on the floor, mass mailings and obscure rallys late into the evening. No wonder I became a Republican... and psychotic to boot.
Either way, I'd say that despite the denials of the Obamanoids, Palin's Candidacy has really fired up women everywhere. Obama had hoped to get the Hillaroid Voters to jump on his bandwagon, but because of the "Palin Gambit" (similar to a Hail Mary in football) the McCain Campaign has taken a major lead in the polls, and might be able to crest this to November if they play it smart. Because of the 'lack of class' and sexist approach that the Barryfolk took towards Governor Palin, and thereby women in general, well, frankly it can't be recalled... unlike Biden.
Which in itself is becoming a real posibility. However, if they DO recall 'Slow Joe' and attempt to re-instate Hillary, then the Obama Campaign will be finished. After all, who's to say Hillary would even be willing to be 'sloppy seconds' in a desperate attempt to mend fences? I'm sure she wouldn't. Her best move will be to sit pat, keep quiet, let Obama and his Obamanoids flounder and flop like a fish out of water for the next 5 weeks, and allow McCain to be a one-term Presidency and attempt to jump in in 2012. Joe however isn't helping matters. His best bet to stay on the ticket would be to volunteer to have a laryngectomy performed. Hopefully he won't though, as he's providing enough fodder for late night humor TV for the next generation or so.
Posted by Big Country at 20:06