I Need a Drink Part II

OK... a couple of you emailed me asking:

"Big Country... Why don't you just have someone mail you some booze?"

Well... Valid point. A favorite way of getting illicit hootch over here, many people including myself have been the recipients of "Care Packages" of "Liquid Love" as I like to think of it. Well all fine and dandy... theres a dozen ways to ship hootch... one of my faves is the "Substitute the Scope" game, whereby the sender replaces a jug of Scope Mouth Wash with a quality Vodka dyed with the appropriate color, be it minty green to cool refreshing blue. The only problem is getting the jug that contained the scope to be mouthwash free before reloading it with Vodka. From painful first hand experience I can tell you that if the mouthwash isn't completely cleaned out, it will give the vodka a 'cool minty' aftertaste that results in a heartburn that feels like Satan himself is trying to burn his way out from your chest. It's not much fun to be having a "...double shot of Smirnoff with a maalox chaser" let me tell you. Makes for a really vicious hangover too.

The real reason I'm well behaved is that as of July here in Kuwait the Local Yokels and County Mounties have gotten themselves a new toy. One that allows them to pretty much smell booze in a sealed package. This in turn led to the single largest bust in the history of the Army Support Group here and to the point they even took pictures for posterity. That and they just wanted to tease us and show how much Booze they busted. As you can see... 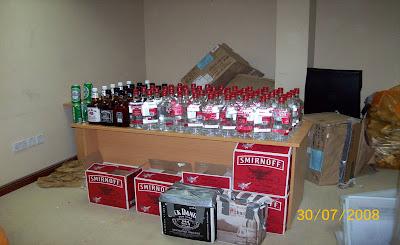 ...I'm sure that the MP brigade on post had one hell of a party. 90 1.75 Liters of Hootch... 66 Bottles of Vodka and the rest was Jack and Jim, respectively. We're talking "Booze Baron" levels a.k.a Homer Simpson on the amounts. And this was only because of the new handy dandy XRay Toy that the military just picked up.

To give a rough approximation, according to sources, The Black Market Value of just one jug of Jack is like anywhere from 200 to 350 US Dollars. Yeah... banning it made it a real commodity on the Black Market. My guess is that this particular batch was worth around twenty grand on the low side in resale value. Needless to say, I may want to make cash, but not at the risk of getting caught. Here in Kuwait I heard that the jail cells aren't very large... just large enough for you and your cellmate to get to know each other 'intimately.' So no thanks on that.

Me, I'll wait til November when I go on R&R.

Yo Billy, how about barley and hops shipments? I am sure you can get some 5 gallon pails to make beer with, will brew kits get past the party wreckers? BRasi