Man, I Need a Drink 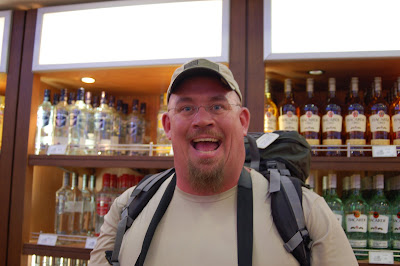 This was me back during my trip to Egypt last summer. Egypt, despite it's Islamic Background still maintains a bit of common sense and has legal Booze. Suffice to say you can tell by the look on my face that the only thing on my mind was getting pie-eyed toute-suite. Needless to say about 4.5 seconds after my buddy snapped this photo I was neck deep swigging from a jug of Jose Cuervo 1800 Silver Patron and well on my way to a coma.

Such which leads me into today's subject. I need a drink... dying for a drink actually. It makes me really wonder what is on the minds of the Kuwaitis maintaining this 11th Century approach to Law and Order. This country, which prides itself on its Islamic Approach to Law, (dubbed Sharia) leaves itself open to being the biggest bunch of fucking HYPOCRITES that I've ever seen.

"Hypocrites Big Country? Whatever do you mean?"

Well, let me see... for one instance that leaps to mind was the drunk ass Camel Jockey who rammed into my SUV back last Decemeber, leaving me with an extra set of screws, plates, and pins that I wasn't originally issued with. I mean it was nice and all to accessorize, but I already had a 'donation' of extra metal courtesy the Iraqi Insurgent Bastards and the Chinese mortars that they threw at me back in '04. How do I know he was a drunk Camel Jockey you ask? Well... the fact is that immeadiately AFTER the wreck, (DCJ as I'll refer to him as henceforth) DCJ's buddies rolled up in another car and like immeadiately emptied the trunk of his wrecked ride... said things being removed in question being shaped like cases of Johnny Walker and clinking like cases of Johnny Walker, and with labels that to a suspicious person might have even read "Johnny Walker" to an astute observer. According to other witnesses, even a couple of handguns were pulled out... me... I only remember the booze and remember how pissed I was that this joker had enough hootch on board to float one hell of a party. Since then, I've been told that BECAUSE he was hauling booze, literally a "rum runner" this's why I never had any further legal action taken either for me or against me.

Yeah... it seems that the reason I didn't get hauled off in front of a magistrate to answer for being an Infidel Driving Recklessly is that I got clowned by someone who was probably 'connected.' Such is life in the Hypocritical Middle East. He was probably hauling the hootch for someone 'important' and therefore, we'll just forget this ever happened ok?

Yeah. I was advised that trying to sue this POS would have meant having it judged in front of a Sharia Court... which means I'd be lucky to NOT get sued back, and never mind being found guilty of being "a Pork Eating Crusader Infidel with Intent to Defame Islam" or some other bullshit like that. Yeah... the deck is stacked against me in a major way. Such is the tear that I'm on.

Specifically, I'm thirsty as hell. I's been since I was home in July since I sipped the 'Nectar of The Gods' and I'm cranky because of it. My liver is so bored it's been taking a brewmaster correspondance course and the kidneys are getting tired of processing just water and soda. It's enough to make a guy think about taking up a hobby. Maybe smoking? Probably not. I mean hell, at least back in Iraq I had hootch. Acres of Hootch. At one point the Countries INC. had a store room liberally stocked with over 20 cases of Heineken Tall Boys and about 5 cases of mixed liquors. I mean the only thing I had to risk in buying the hootch in Baghdad was a life-endangering ride up Route Irish to the deal with the Jordanian Mafia. I mean compared to this, it was a piece of cake.

I've intentionally NOT gotten involved with the boozer scene here in Kuwait. I'll just have to suck it up until my next R&R or next job... whichever comes first.
Posted by Big Country at 22:45