Well enough 'stuff' has happened over the past few days to take any beliefs that I might have had as to the decency or 'common good' that anyone on the Left side of the Political spectrum might have had and finished it. They pretty much made me think that at this point, it's a good thing I'm not in charge as I'd have to declare open season on quite a number of people and put a bounty on the heads of many of the 'talking heads' on the Left. Bounties that would require proof of demise. No "bring 'em back alive" allowed. Preferably skins and scalps. I mean after all, if all of us "bitter clingy gunowners" are such unmitigated murderous dirtbags as the left would portray us as, I'd say that we ought to go out and fulfill some of their mindless rants and fantasies with some good old fashioned ass-kicking reality.
Anyways... enough on that. I think that anyone with any level of brains will vote correctly, I.E. None of the Above on election day... wouldn't that be great? I mean with the exception of Palin (who I think is a total hottie) the rest of them are more of the same. Even McCain... ALL of them are fucking worthless. I just have a special place in my heart and on my rifle range for people of the Leftist Extraction. Even my Dad has been sipping the Kool Aid this year... he goes from one extreme to the next. But anyways.
"So then Big Country... just who should we be voting for?"
Glad you asked that my friend. How about Christopher Walken? 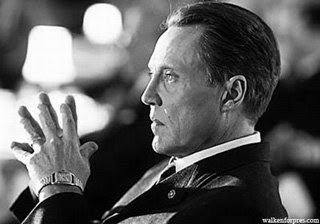 I mean hell... Why not? There's even a website that was put together a while back http://www.walken2008.com/ I mean why the hell not? Who was Ronald Reagan but a former actor? And he turned out to be one of the greatest presidents of all time. I mean hell... look at the picture... gravitas to spare man! I mean even About dot com did a review of the website and then had a poll which kind of sheds light on the electorate is feeling these days.I mean out of over 3800 people who voted (as seen on the screenshot I grabbed right below) 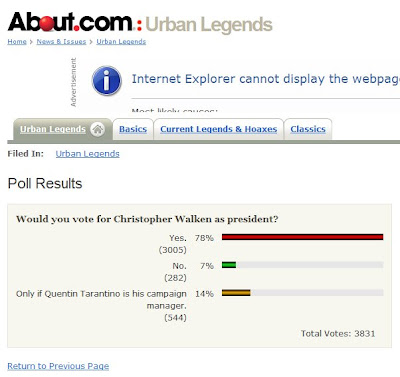 That over 3005 of them would vote for Chris right now. Its not often you see this kind of numbers in polling. Now, granted, the polling here is about as non-scientific as you can get, but hell... lets face it. Right now the Obamamessiah and 'Mad Dog' McCain are literally neck-and-neck inthe polls, and seem to be staying that way. There's no clear cut winner as of now, and unless someone gets caught either raping or murdering (or both at the same time) the votes are going to be split pretty evenly, which is going to open a WHOLE other can o' worms when the lawyers and assorted race barons and douchebags come leaping out to play in the post election fray.

Mark my words: The post election of 2008 is going to be a racially oriented and lawyer bloodbath, if not physically, then metaphorically. The Obama folks are going to be crying (as they already have) "Racism" at every corner and use it as a blunt instrument to get the election won in their favor. It's really too bad that we can't really get Walken to be 'drafted' into the Presidency.
I've always been a fan of his dating back to one of his earliest works "The Dog of War" where he plays a mercenary who violently overthrows a small African nation. Huh... now that I think about it, how appropo that that was one of my earliest "fave movies." Just look at the line of work I'm in now!
Posted by Big Country at 02:31