Ok Today Ladies and Gentlemen of the Studio Viewing audience, Your Intrepid Reporter of Fame and Legend is going to relate a few things I noticed in watching a Discovery Channel show the other night. Seems that this was a show talking all about "The Greatest Generation" and the entire World War Two experience as it were. This was a somewhat edjamacational show for those who aren't ardent students of history, but the part that got me, and what sort of teed me off was the constant harping on how "hard the troops of the line had it." And how it was soooooo tough and that the 'younger generations' couldn't 'appreciate the hardship that those troops had to endure.' I call Bullshit on that. They kept having intersperced interviews with some of the guys who were 'on the line' back in the day, but the overwhelming tone of the entire show was "you young folks don't have it as hard as we did back then!" sort of crap. The "I walked up two miles to school everyday, uphill, both ways, in a blizzard!" sort of bullshit. This got me to thinking, and speaking purely from a neutral point of view, those guys back then had it as cake compared to today. 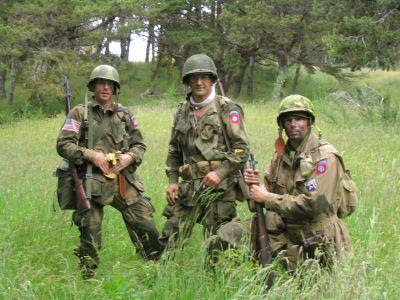 This picture I ruthlessly stole from a reinactor website for the 82nd Airborne. The reinactors claim total authenticity, and seeings it was a good shot, it shows how much "Battle Rattle" the grunts in 1944 had to hump. Now granted, the average load bearing gear back then compared to today was primative, but man... the amount of stuff these dudes have on what was called a "Routine Patrol Pictured" shows the basic combat load of an Airborne Infantryman in the field. Notice the Ammo pouches... 4 to a man, 2 on each side, one 'clip' per pouch. Each guy is also wearing a 'steel pot' with liner, and wearing a small rucksack. The weapons pictured are M1 Garands... heavy as hell but a solid 8 shot weapon. Also visable on one guy on the left is the sheath to a knife, probably a close cousin of the K-Bar the marines carried. Add one canteen per man, and realize they were operating in Europe in June... 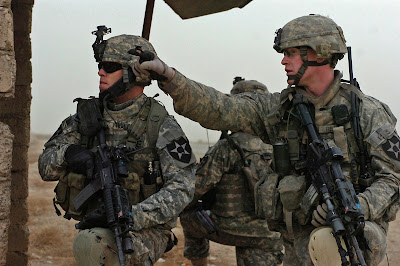 Now: Compare this to the dudes from the 2nd Infantry Division in a picture shot in Iraq last year. It's not totally clear, but I know, from Experience, that these guys are saddled up in a Kevlar Vest with Plates that tips in ALONE at 50 to 72 pounds depending on the size. Thats just the body armor. Add in at least 3 ammo pouches/bandoliers of ammo holding 2-3 magazines at a pound apiece, throw in the rest of the gear, usually to include a CamelBack water carrier (3 liters of water) and the other ephemera that a grunt humps and ugh! Lets see "The Greatest Generation" take all that and hump it. Granted, the helmet and body armor help save lives, and they didn't have the high speed technology back in the day, but to have to wear ALL of that and in Iraq where the average mean temperature in the summer is like 120 degrees? Cut the "Generation X'ers" a bit of slack here gang! As a contractor I have to hump my own armor and helmet every time I go out on mission, and man, it shows me to be a fat and out of shape former grunt that I used to be. Hell... back in MY "Old Army Daze" WE didn't even have a set of armor like these kids are running around in, never mind suffering the heat while being basted in yer own juices while wearing this stuff. Add in that back in WW2, you KNEW who the 'bad guys' were, and usually where they were, and you were allowed to shoot them. Whereas our guys now are fighting a 4th Generation style conflict, where the 'bad guys' are invisible, and then, even then, shooting them might get you hemmed up and faced with a murder rap... even if it means saving your own peoples lives! To quote Martin Sheen in "Apocalyse Now": "Shit... charging a man with murder in this place was like handing out speeding tickets in the Indy 500."
Yeah, pluses and minuses to both eras... I'm not bashing the WW2 vets per se, but just in the portrayal that the media (AGAIN!) seems to like to do to our guys on a regular basis... Enough ranting on the media for the moment here.
Things here in Iraq have gotten off to a fucked up sort of start these days, but then again, worldwide, I have a feeling that we're building towards 'something.' That something isn't tangable, but considering the number of mass shootings in the States (10 in Alabama or some such place as of this morning) and the mass murder/suicides and shit thats happening all over because of the economy, stress and all the nasty business that the current Administration seems hell bent on creating in an attempt to create a socialist paradise, well then, it's enough to make a person like me a bit MORE paranoid than usual. I mean Hell, Iraq: Suicide Bombings two times in as many days, with Mass Casualties. Ireland: IRA assholes killing Tommies (Brit Troops) in an ambush and then killing a cop the next day. United States: Multiple Mass shootings in random areas at random times.
Mass Hysteria? Not yet, but definately the pressure is building. The Current Abomination...er Administration is also NOT helping matters worldwide. Between the "Hug Me Fuck Me" message that they keep sending out, and the outright fearmongering going on on the news to further his agenda, shiiiiiiiiiiiiiit. I'm in Iraq and I only see what the mass media feed me on AFN on the tube and what I can garner off of the web, and even I can see things are getting funky. The summer hasn't hit, and the economy keeps getting trashed out, taxes are about to hit the roof, and I got a hunch it's time to restockpile some shit as it's not looking too fucking rosy in the future. Think "Pre-9-11" stupidity. In June/July of 2001, I saw a similar trend of 'pressure building' that subsequently saw a 'pressure release' of 9-11 and the series of unending wars going on.
Now, in 2009, the economy is tanking, the wars are winding down, the gummint is broke and looking to tax the ever loving shit out of anything that moves, all the while taking over whats LEFT of the free market, and man, It don't look good. Me, I say stock up on food and essentials cause they ain't gonna be around much longer... Just look at gun sales... even the 'common herd' is spooked, and the people in power know it. As the Chinese Curse goes "May you live in interesting times..."
Posted by Big Country at 09:59

Yes, nowadays the load may be heavier because of things such as body armor, far superior weaponery, etc.

Also remember that these older guys did things without body armor, and did things like spent a winter in the Ardeins without winter coats or boots, froze their friggen nuts off and did it with pride and won a war.

Never take away from these guys. The “damned Japs” as these guys still call them were just as, if not more brutal than the Vietnames and Chinese. These guys too, went through hell or even marched through hell in Baatan.

I think your biggest point (correct me if I am wrong) was how the communist press builds up the old guys and ignores those of today. Where they are correct is in showing the old guys respect as they were an incredible generation that we should all thank god for. But, that is where it ends. In every other aspect the press are the biggest scumbags on earth. So yes, pay the old guys respect - my Dad is one of them, and yes too, pay the new guys respect. 120 degree's with that kind of load is hell I am sure, so was 10 below zero with little protection from the elements, being cut off with limited ammo and food and still having the balls to tell the Germans to go fuck themselves and refusing to surrender. This is just one example of many.