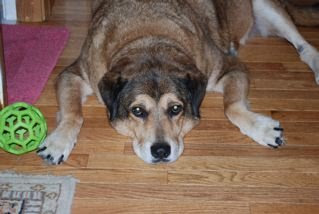 I got bad news last night. My faithful parter, the first dog I ever had and worked with, Bomber, was put down this past weekend. My Mother had the duty as she and my Dad have been his caretakers since his 'retirement' as a military dog and since I've been overseas. My Mom, is, of course devastated. My Dad, who is fighting cancer, is in a similar state. I sent this as part of an email that I thought I'd share, as it's probably the best way to memorialize him, and help my Mom get through this tough time:

"Bomber was a force of nature that touched all of our lives, and will be greatly missed. Please don’t go hard on yourself about having to perform that task. If anything, he himself would appreciate the love and compassion that you showed in helping him into the next phase of whatever we go to after this. He was the greatest dog that I have ever had the privilege to know and love. He would TOTALLY understand the what and whys, and as he was a ‘soldier’ in his own right as a military trained dog, I think he would appreciate the ideal that MacArthur put forth that “Old Soldiers never die, they just fade away.” You allowed him to fade away with his dignity intact, and his next phase will allow him to blossom in the hereafter, as a spirit like his can never fade, but only grow stronger. "

Requiet in Pace, Old Freind, May we meet again.
Posted by Big Country at 19:57

Well said and a very appropriate tribute to the most incredible pooch I have ever known.