Despite the Recent Mortars... 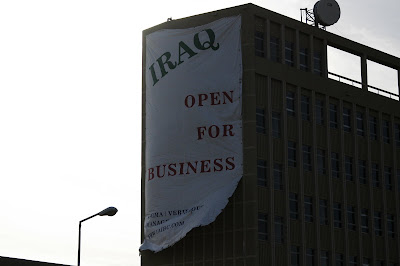 I've been really busy on the job, but have been trying to update and such. FINALLY though, I"VE GOT BANDWIDTH!!! Which means y'all get a few pictures, and later, hopefully if it works (not in this post mind you) but video too. The pic above is of a new 7 or 10 story building in the Baghdad area... It's a new business center, and as you can see, they want YOU to KNOW that they are, as the sign sez "OPEN." It's a sure-fire positive sign of things getting better. A picture that would NEVER be published in the states, but here it is, Brought to you by the letter "F", the number "69" and the World Famous Intrepid Reporter. 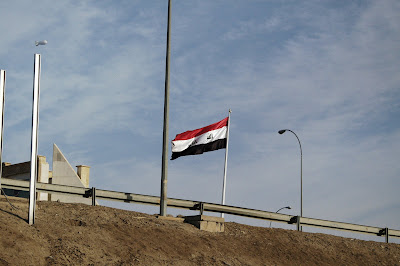 This one here I just sort of snapped on the way home. What struck me is how the Media, Other Governments and Liberal Fucktard Assholes of the planet (and in our own country) try to make us out to being an "Army of Occupation." Let me ask thid: In World War Two: Did we allow the krauts to keep flying the Swastika when we won? Answer: Fuck No! So, my 'proof' of this NOT being an occupation is this: a simple Iraqi National Flag flying proudly on Route Irish... which in itself is amazing as in 04, normally I stood a decent chance of getting shot if I stopped to take a pic like this.

Now, to update on other things and ephemera. Before the "One" was crowned...er...cor'nated...er... I mean the in-auger-ated "One"... you know, that black dude. Anyways, the Dirty Haj had been throwing all sorts of nastiness our way, which in a word, SUCKED. That and the closure of the Duty Free... no more easy booze unless I go to a bar OUTSIDE the wire, which in itself is an adventure, as it means
A) going to bar
B) drinking like a fish as fast as possible (Chug 3- 1 liter Beers and 3 Double Jacks in 45 minutes)
C) jumping back in the truck and hauling ass back to base and getting inside a 'safe zone' before the buzz REALLY kicks in. (Gotta appear sober at the gate, lest the authorities become aware you've been boozing.)
It's sort of an "Extreme Drinking Game" put to it's fullest extent... 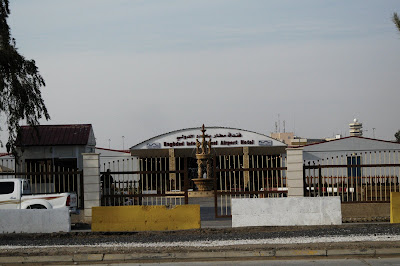 Said Bar being located pictured above, the Baghdad International Airport Hotel and Convention Center. Home of the Sinbad Bar and Grill. Yep. No shit folks... and yeah, that is a functioning fountain in the froont. They've recently added on to the building and added a Shisha Cafe, which is where you go to smoke up the flavored tobaccos through a Hooka Pipe. It's a nice hotle, but a bit pricey at $225 a night for a suite. But considering it's 6 bux for a beer and 3 bux for a decent shooter of booze, I'll risk the $$$ and the time to go. Seeing the asshole in the back waving his hand... What do you want? OH? WHY would I risk life, limb and my ass in going out there? Well... the answer is simple Poindexter: 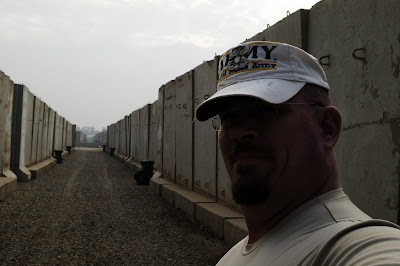 I live in fucking Stonehenge.

Big fucking rock walls surround every fucking inch of my house, my yard and my life. THIS is why I booze...

You would too, if'n you were here.

Until Later, I'll keep my head down, and my liver lubricated. Email me those of you who do, and let meknow what you think of the pics and such. Otherwise, I remain The Intrepid Reporter.