Maybe I spoke to fucking soon....

The IR here again for a short update... Man... WTF is it about me and speaking my fucking mind? I must have been born brain damaged or under a fucked up sign... Here I am, Back In Baghdad, formwerly known as the Saddam-A-Go-Go, and things have been quiet.

Too quiet as it were.
Last Evening we're out having our first bar-b-que, and yes, the famous "Big Country Ribs" were being featured. Granted, I was showing off my culinary skills, and the fact that I'm out at 8 at night, bbq'in and theres nothing happening except good food, cool drinks and some cute babes rolling through, well, all was good and happy. I even commented on how absolutely quiet it's been, which of course just like in the movies, means the fucking killer/monster/whatever is about to jump out within a minute.....
BBBBBBBBBBBRRRRRRRRRRRRRRAAAAAAAAAAAAZZZZZZZZZZZZZZZ!!!!!!!
Followed by a long line of what appeared to be laser fire of rubies tracing across the sky... and then of course the obligatory siren, and of course, the follow on "Crump!" of the shell hitting. Yep.
We had our first Mortar attack since fucking June tonight, and it spooked me minorly… as in not the mortar round but the fucking CIWS gatling gun ripping loose… I didn’t expect that shit and damned if I didn’t jump a mile… they never had that shit in 04 and 05, so damn dude… what a surprise that shit was. I was more frightened by the defensive outgoing than the fucking incoming! LMAO!!! Go figure that its on a night I’m partying (first time since I’ve been here) that the fucking Dirty Haj lob a shell at us… fuckers…
It seems the outgoing is the one thing that the navy provides here on many bases as defensive arty as one would say. 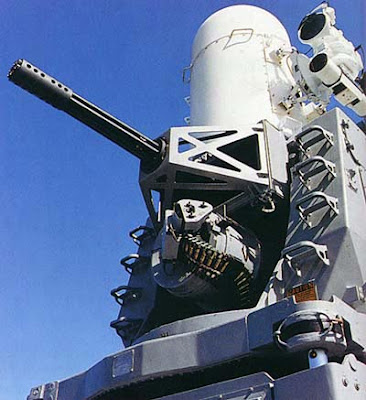 Some mad genius decided that the Phalanx AEGIS Close In Weapons System that defends our boats from incoming missles might work when mounted on the ground... which is exactly what they did. They took 'em of decommissioned boats and put 'em on a flatbed. a 20mm Gatling cannon mounted and when the radar, if it has time to catch it, lets this fucking madman's creation Spray out a wall of lead in the direction of the incoming round. Now, a great idea, an excellent concept, but as I heard last night, it doesn't always get the incoming... in this case, judging from the 'crump' of impact, I'd say it was because it was a small mortar, probably a 60mm... no larger.

And it figures that the Dirty Haj had to do this shit on my first night of partying... go figure huh? The light show was pretty, but damn, like I said, I was moore spooked by the outgoing than the incoming. Where you figure that the mix is usually one-in-five tracer to regular round, and what I saw would put George Lucas to shame, God Bless the Navy and the mad appetite of that 20mm Monster. I'd hanker they probably with that 'squirt' of 6 second fired about 2000 rounds. Like I said... I was more spooked by the outgoing than the incoming.

The good news (thusfar) is that there was no apparent injuries and the round just was one of those "Hey assholes we're still here." harassments. I'll be happy when they go out and nuke the part of town that it was lobbed from, as it's in a direct line from my trailer, and the last thing I want is the Dirty Haj to be lobbin any more shells over my crib ya know?

The Thunder Run has linked to this post in the blog post From the Front: 12/01/2008 News and Personal dispatches from the front and the home front.