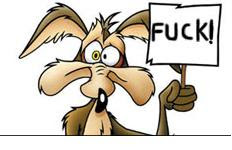 OK... I come over here and work my ass off for the better part of the past two fucking years... It'll be two years January 23rd to be specific. I've been over here and only home 3 times int he past two years. Granted, one trip for three months, so the two year arguement to certain assholes, specifically Corporate Assholes type many each, doesn't count.
Well... since I fucking quit, I've now been royally fucked over. To the extent that they didn't tell me my passport was held up by the Kuwaitis, (I already covered that earlier) and NOW it would seem the company doesn't want to pay for my airfare home.
Their answer? The Freedom Bird.
Yep. They wanted me to fly out on a military plane... a chartered military plane... as in "Fly-By-Night Airlines." To the uninitiated, a favorite 'sport' of retired Air Farce Generals is to go out on retirement, and buy up aging L-1011 Tri-Stars and DC-9s and get them just airworthy enough to fly charters for the military. Omni Airlines is one prime example. Another example was Arrow Air... better known for Flight 1285 which killed 258 members of the 101st Airborne Division in Gander Newfoundland in '83 when a DC-8 they were flying decided it didn't want to fly no more and the subsequent crash wiped out nearly one Battalion of the Best Airborne Soldiers in the world... Any wonder why I don't want to fly with this? Besides the fact that the charter will be overloaded with soldiers who are headed home... The majority of them don't want to be around a 'scumbag contractor' after 18 months in the desert.
Not only that, but to add TOTAL insult to these already fucked up proceedings, usually they pick a 'detail' of soldiers AND contractors to load the belly of the plane... Yep... Old Man-You-El Labor time. I got picked once... rather conned would be a better description. My first trip over with CACI, Little Country and Me got told that if we did baggage detail we'd have the first class comfy seats for our trip as a reward. Foolishly we believed these fucking douchebags only to find out after that the plane had like 35 Colonels that took said big comfy seats as a perogative of rank. When we landed in Kuwait after flying in the cheap seats, we then had the priviledge of UNLOADING the fucking plane again. Difference was Me and Lil Country found some of the Colonel's Duffel Bags, and seperated them from the other Joes' Luggage. Needless to say after we finished peeing in the bags, we felt both much refreshed, and happier knowing that in theory we had pissed on them's who done pissed all over us, if even in absentia. Looking back, I wish I had gone with the urge to take a dump in it too, but thats neither here nor there. By the way... also: because it's a military charter flight it means no fucking booze!!!!! Is that just fucking wrong or is it just me?
Yeah... so anyways, they 'tried' to book me on this past Friday's Freedom Bird Flight. It runs every Friday. Come to find out... Oops! They missed the deadline because THEY didn't get me to resolve the Passport issue soon enough, and hey, while you're at it, wait til next week. Without pay. And by the way, we're taking back all your bonus money this pay period too... because we feel like it. Fuck you and you will like it.
Yep. They want me to wait til next week. Fucking douchebags. Fucking the new company I'm with has been WAITING on me for like ever, and this old company doesn't give a shit. I mean granted, I quit. But they have some responsibility you would think to get me home promptly right? Not a fucking chance. My next move is to either sue them if I lose this new gig, or actually, my next one is to post ALL the private information I can get online here and fuck them up. I'll leave it for now, but if they really fuck me over, I'll poist home phone number, anything and let the internet go wild on their asses. Fuck them is what I say.
And just for the record... My Current Asshole Company is;
STANLEY ASSOCIATES
so fuck them. Miserable cocksuckers. Can you believe that this company was listed as one of the Top Ten Companies to work for by Forbes Magazine? What a crock of shit. I'll try and contact Forbes Tonight and see what they say. Until my next, I'll be here.
Posted by Big Country at 18:24